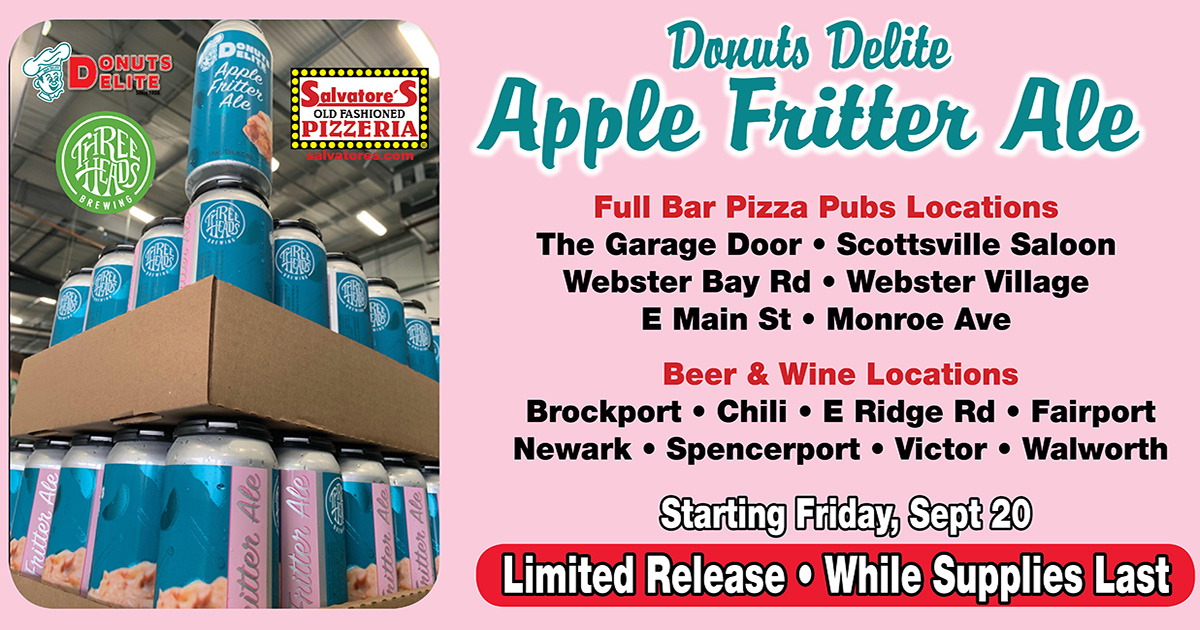 Nick Semeraro, Owner/Operator of Donuts Delite, and his bakers supplied Three Heads with 720 giant apple fritters. These fritters went directly into the mash to produce this beer. 1,500 gallons of freshly pressed apple juice from DeFishers Farms in Williamson were also used, to keep this brew as local as possible.

"720 gigantic apple fritters were be used in the process. So it’s probably the equivalent of about 2,000 regular-sized donuts, maybe 2,500, since these fritters are just so enormous." said Dan Nothnagle, Co-Founder of Three Heads Brewing, "The Donuts Delite fritters were used throughout the brewing process to add some complexity, flavor."

This partnership follows the ‘Lancers Lager’ collaboration already put out. "We have been working with Three Heads for about a year on different beer ideas since we first partnered to create Lancers Lager." said Salvatore SoccerSam Fantauzzo, CEO & Founder of Salvatore's Pizza. "At Salvatore's, we love local supporting local. I am proud to show the Malley Family, who started Donuts Delite in 1958, that their recipes, name and logo lives on. Nick Semeraro, the current Owner/Operator of Donuts Delite, is doing an incredible job, as well as his staff and bakers."

"Recognition is due to my amazing bakers who worked 18 hours straight to supply this large amount of fresh apple fritters to Three Heads, as well as still baking our everyday donuts to fill our shelves." said Nick Semeraro, Owner/Operator of Salvatore's at the Historic Donuts Delite. "We are so excited!"

"We hope when people see these Rochester collaborations, they think of it as another way to enjoy their hometown." Said Dan Nothnagle of 3HB.

Three Heads Brewing Inc started in 2010 by Dan Nothnagle, Todd Dirrigl and Geoff Dale. They wanted to fill the craft beer void in Rochester and combine great craft beer with good tunes and positive vibes.  In 2016, Three Heads moved into their new, state-of-the-art brewery at 186 Atlantic Ave in Rochester’s Neighborhood of the Arts.  Their libations can be found throughout Western and Central New York.